Valentino As I Knew Him: Read The Complete Ghostwritten Novel (FREE)

If you're uninterested in spending nearly thirty dollars reading this ghostwritten novel, we are providing it here, for free.  It has been in the public domain for quite some time, although certain authors (Evelyn Zumaya) would lead you to believe otherwise.

Please find a complete review* of the book below, as well as the link to read it, in its entirety, for free:

"Valentino As I Knew Him"

I always thought that this was a wonderful title for S. George Ullman's book.  This book which carries Ullman's name as author, was actually ghost-written by publicity people.  Valentino was buried on September 7, 1926 and the first edition of this book was released the next month in October 1926.  I am sure Ullman wrote down some of the events and experiences he shared with Rudolph Valentino and the ghost writer put in into book format, flushing out the stories with praise for Valentino on almost every page.  The public ate it up and the book was quite popular. Even to this day it often referenced as a 'favorite' when fans share a list of Valentino books they enjoy the most.

George Ullman wasn't above stealing a wee bit of the limelight for himself.  On page 120 he openly boasts that it was he who was instructed to have the legendary platinum slave bracelet created.  When in truth it was Valentino's head of household man, Luther H. Mahoney who took Rambova's design to the jewelers.  Mahoney left audio tape of this story in which he mentions Tiffany's and the street it was on.   Actually it was Brock's Jewelers and they were called the Tiffany's of the west coast.   So, no Ullman didn't have a thing to do with the slave bracelet creation.

Obviously written in haste - when you have a book come out a month after the person dies, errors will abound.  Valentino As I Knew Him suffered slightly from this, as one of the pictures in the book showing the Whitley Heights home is captioned as being Falcon Lair.  Of course George Ullman knew the difference, it was just an oversight that the proof-readers overlooked because they were not knowledgeable about names of Valentino's homes. It just gives more proof that Ullman was absent during the books creation.

George Ullman's book coming out a month after Valentino's burial appeared to be in a race as he probably heard that Rambova was penning her own book, which she was.  Rambovas book came out in December of 1926 so he beat her by two months.

The book Valentino As I Knew Him is an easy, fun read.  Stories are told and everything, glorification aside, sounds sincere.  One of my favorite passages was when Ullman, describing Rambova, stated something to the effect of how puzzled he was that Rambova remained oblivious and unaffected to the charms of Rudy that were so easily seen by others.

Here is a first edition of the book. 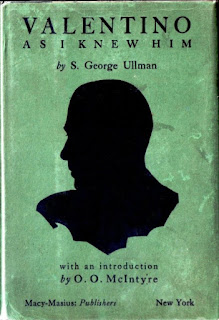 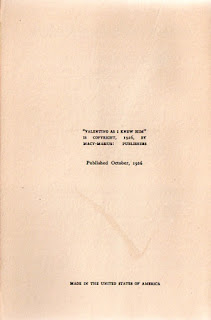 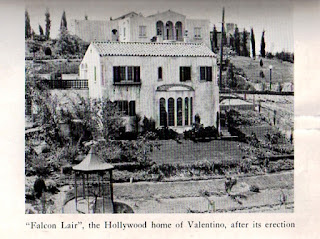 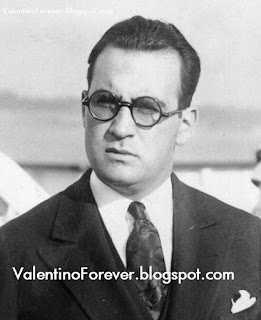 To read the entire book for free, click HERE.